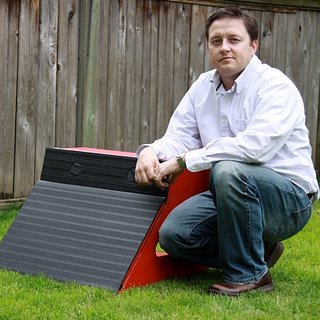 Purchase individual Ball Thrusters to mount into your own box shell or retro fit them into an existing box.

Mike has been designing and making flyball equipment and equipment plans since 1997, from a modest but well equipped wood and metal workshop. Producing original design ball thrusters and release mechanisms for the flyball community world wide.

What is flyball you ask? Flyball is dog relay racing with 4 dogs on a team. Each dog goes over 4 jumps, triggers a box the shoots out a ball for them to catch and the dog returns, then the next dog goes. The team that finishes all 4 dogs first, error free, wins.

What started out as a challenge from the owner of his first flyball team in 1996 lead Mike to start up a fabrication shop to construct flyball equipment for others in his region and later world wide.

When Mike's own flyball team(s) started seeing improved results upon every new design, concept and idea, he knew it was moving in the right direction. When other top teams started using Mike's equipment with great results and they started recommending his equipment to others, he knew that all the hard work was paying off.

Now-a-days Mike is mostly focusing on Thrusters and taking limited orders on complete Flyball Boxes. With overall dogs speeds and team times getting faster and faster the need for reliable, fast reacting and a stable flyball box is becoming more of a necessity rather than a luxury.

Flyball equipment by a
competitor for competitors

Are you a Handyman into DIY?
Download Free Flyball Box Plans to build a basic box, purchase modern box plans/kit or watch a video on how to make jumps. You can even purchase a set of plans to build a modern box.